Granot Loma is a 26,000 Square foot log cabin listed in the National Register of Historic Places. It has 50 rooms, a 3,000 gallon hot tub, an indoor boathouse and a private harbor. The property includes a private island, and over 1 mile of private Lake Superior beach front. There is also a farm complete with an apple orchard and 13 separate buildings. A total of 415 acres of beautiful, private, Northern Michigan real estate. 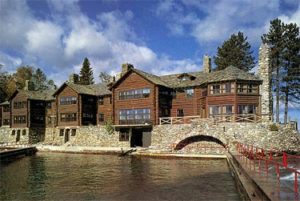 Granot Loma was built between 1919 and 1923 by over 400 Scandinavian craftsman at a cost of over $5 million dollars by Louis Graveraet Kaufman. It is the largest log cabin in the world. LG, as he was called, wanted a summer home that would rival the wooded retreats built by the Gilded Age magnates in the Adirondack Mountains of upstate New York. The early Great Camps of the Adirondacks began as simple tent camps. From 1870-1900 more than 200 hotels were built in the Adirondack Mountains. As hotel guests sought a more authentic wilderness experience, land was leased from hotels and tent camps were built. These camps evolved into compounds of rustic cabins. The use of rustic, native materials and craftsman were the hallmarks of distinctive Adirondack Architecture. The largest and most luxurious camps were built on large landholdings quite frequently by wealthy families excluded from the traditional Adirondack resorts because of ethnicity, religious belief or just snobbish competitiveness. Similarly, Louis Kaufman was excluded from the Huron Mountain Club and built Granot Loma as a result. 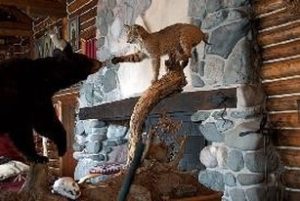 Kaufman sought to build the grandest camp of them all. The Vanderbilts, Astors, Guggenheims and Rockefellers had built whimsical, grand camps as wilderness escapes and Granot Loma was built to surpass them all in splendor. These Great Camps were intended to nourish the romanticism of “roughing it” but in supreme luxury. Twenty two architects were employed to design the assembly of logs wrapped in burlap, shipped by train and then erected around a steel frame embedded in a 6 foot thick cement foundation to protect it from Lake Superior.

The name Granot Loma was derived by LGK from the letters of his first three children, Louis, Graveraet and Otto combined with Mr. Kaufman’s first name Louis and his wife Marie. It has been featured in numerous publications such as Architectural Digest, Car and Driver Magazine, Log Home Architecture, Playboy Magazine and the Chicago Tribune to name a few. Descriptions and pictures do not begin to explain the jaw dropping awesomeness of this grandest of all the Great Camps. Granot Loma in comparison to other Great Camps is similar to comparing the Titanic to other ocean liners of the day. The detail used in the construction by log cabin craftsman is extraordinary. The door knobs are hand painted with Indian scenes by Hollywood legend Orry Kelly. The chandelier in the Great Room is the root system of a white pine that LGK played under as a child. It has over 50 animals, insects and people carved into and on it. The mantel in the 30ft fireplace was the beam in a sunken ship retrieved from Lake Superior. Mrs. Kaufman personally selected the rocks cemented in the fireplace from a row boat and instructed divers to retrieve them. 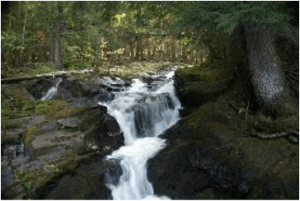 Marie Young Kaufman oversaw the building of Granot Loma for her husband. Her father was Otto Young who was a jeweler from Chicago that bought half of the Chicago Loop after the Great Fire of 1872. He built Stone Manor on Lake Geneva, Wisconsin and gave each of the Kaufman children $1 million dollars when they were born from 1900-1910. They were nicknamed the “million dollar babies”. The history and the folk lore surrounding Granot Loma fill chapters in history books but the lodge at Granot Loma is so magnificent that the stories only enhance the majestic aura.

The murals and paintings throughout Granot Loma were painted by Orry Kelly before he moved to Hollywood and won 3 Academy Awards for Best Costume Design. He worked on many films such as 42nd Street, The Maltese Falcon, Casablanca, An American in Paris and Some Like It Hot to name a few. Cary Grant was a pall bearer at his funeral and rumored to be his significant other. Such tidbits of Granot Loma lore could fill a novel.

The architectural and financial planning of the Empire State Building were finalized at Granot Loma by Louis Kaufman. The financial reconstruction of General Motors in 1917 was engineered by Louis Kaufman at the behest of William Durant who had joined forces with Louis Chevrolet and needed to reorganize his company. Hollywood legends such as Fred Astaire, Mary Pickford and George Gershwin “camped” at Granot Loma. United States tennis legend Bill Tilden designed the tennis courts. Mohammed Ali visited Granot Loma in the 1970’s and attempted to purchase the property in order to turn it into a boxing camp. 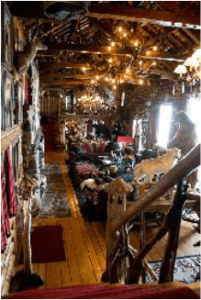 Chicago bond trader Tom Baldwin purchased Granot Loma in 1987 and restored the lodge to its former glory as well as adding some touches of his own while updating the building. A new kitchen was installed that replicates the kitchen in the White House. A glass atrium in the kitchen overlooking Lake Superior was installed as a breakfast nook. A 3,000 gallon custom Jacuzzi was installed to overlook the southern view of Lake Superior and sits next to the Loma media room. The original 1900 Brunswick pool table with inlaid silver and mother of pearl décor is still in the same spot next to the Steinway baby grand piano painted in traditional camp colors. Granot Loma was listed on the Register of National Historic Landmarks in 1991.

Please fill out the form below and you will be contacted. Serious inquiries only please.