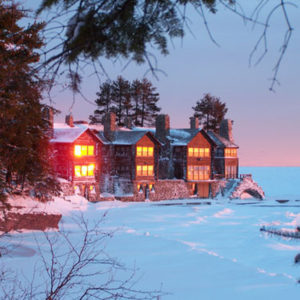 Tom Baldwin purchased Granot Loma in 1987. Wikipedia summarizes his career this way: “Lucian Thomas Baldwin III is a bond trader investor and founder of the Baldwin Group of companies. He was described by the Wall Street Journal as the trader who can single-handedly move the Treasury bond market. His preferred instrument to trade is the 30-year bond in the pits of the Chicago Board of Trade.

“After receiving his Masters degree in agribusiness Baldwin worked as a meat packer in Ohio. He moved to Chicago with the knowledge about trading he had obtained from a few courses taken at graduate school. With the U.S. experiencing high inflation in the early 1980s treasury bonds became a preferred market for hedgers and speculators resulting in high volume and trading activity. These bonds became Baldwin ‘s favorite instrument to trade and he leased a seat on the exchange.

“As a full member director of the CBOT Baldwin has been a part of its executive committee, Commodity Pool Operator/Commodity Trading Advisor committee among many other executive positions at the exchange. He currently serves as Chairman of Baldwin Group Ltd, the parent company of several investment and financial services. Companies in the group include: Baldwin Commodities Corp., a Treasury Bond Futures proprietary trading company; and Baldwin Managed Futures, a CTA. Past firms include: Baldwin Asset Management Co., a real estate management company, from 1991 to 1998, MC Baldwin Financial Co., an international financial services joint venture between Mitsubishi Corp. and Baldwin Financial Corp. and Baldwin Development Co., a real estate joint venture with Chevron USA and ING Group, Holland, from 1990 to 1998.”

While those are the facts, a more colorful article, “Hedging Stress”, that appeared in of all places Cigar Aficionado late in 1997 captures for me a sense of the excitement, humor, risk and reward of bond trading at the Chicago Board of Trade. Here’s a sample:

Lucian Thomas Baldwin III, who goes by the acronym “BAL” that he wears on the badge pinned to his purple trading jacket, occupies the top rung on the volatile, high-stress ladder of trading in the Treasury-bond pit of the CBOT. He became the biggest in the world by withstanding the slings and arrows of outrageous fortunes being made or lost in seconds. Not that there is an official ranking of this kind of thing, but Baldwin’s exposure on any given day is in the neighborhood of $5 million. Fellow traders call Baldwin “The King. … a man who started with $20,000 in 1982 and has been known to trade as many as 60,000 contracts a day with a total face value of $6 billion. “I’ve made $2 million in a day, but I’ve lost $5 million in a day,” Baldwin says. Five million dollars. Lost. One day.

The final chapters of Tom Baldwin’s fabulously successful career have yet to be written. These days Tom does his bond trading and runs his businesses from Granot Loma.